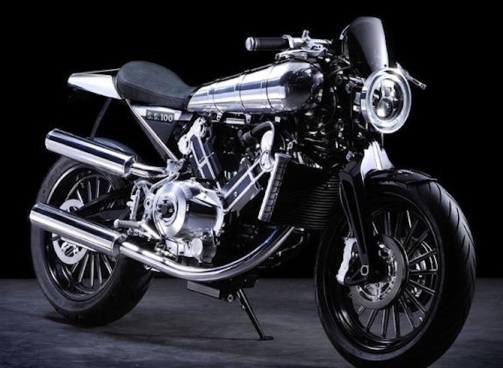 Brough Superior SS100 is a name of legend. Considered by many as the first super sports history, going 100 miles per hour, were made with dropper and today can exceed €400,000 in any auction. From 2015, it was reborn with a new model. This is not a new naked retro style. It’s nothing like what you have seen. An aesthetic based on the 30s, with not only modern technologies, but to no views yet on street bikes. A price will be around €50,000 and behind a motorcycle legend, difficult to provide continuity.

Brough Superior was a mark in the 30’s got has an impressive bike. Considered “The Rolls & Royce of motorcycles”, that original SS100 was a V-twin in whose name (SS100) means Super Sport 100 miles per hour. That figure, in the 30s, it was no small feat.

In 2008 Mark Upham acquired the rights over the trademark. Since then it has been re-making replies of that SS100 of the 30s. But a brand like Brough deserved more. Now, allied with the French Boxer Design, which have created this new SS100 2015 and which will make the final units of the motorbike. They are also known for being the creators and manufacturers Boxer VB1 with Voxan engine.

The engine has been developed specifically for Brough by Akira Enginnering, also French, whose engine expertise has been established recently: responsible for the preparation of the ZX10 engine of Tom Sykes this year.

An original aesthetic, there is no doubt. An engine that will deliver 100 to 140HP, as the customer wants. An original parallelogram fork, very similar to that BMW used, but with Ohlins shock absorbers (front and rear specific to it), and as exotic and expensive materials such as titanium in various parts of the bike. For normal braking systems are used either: two discs double front, ceramic, only 240 mm in diameter, since being double (two disks attached to each side of the wheel) no longer needed. It seems that this way it obtains a minor inertia in the wheel, improving the agility of the motorbike.