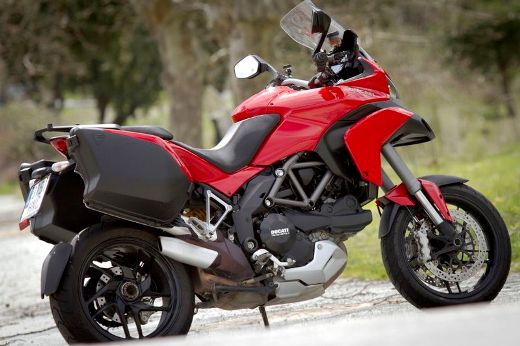 The Italian firm has conducted the first successful restyling its Multi, a thorough review to continue to lead the segment of the maxi-trail sport thanks to latest generation technical solutions as the new semi-active suspension DSS signed by Sachs. Ducati Multistrada 1200 S Touring screen is wider and higher, redesigned tires, the LED beam, the tweak to the Testastretta engine (twin spark, injectors repositioned, more softness in low and less vibration), less abrupt traction control or ABS of the 1199 Panigale S (ECU Bosch 9ME with combined braking and anti-lift on the rear wheel) are some of the many improvements in a 2013 that, at first glance, is the same as ever. But make no mistake: this perception only happens from the outside.

Among all the “gadgets” that provides the 2013 Multistrada 1200 S Touring, its new suspension Sachs DSS (Ducati Skyhook Suspension), which modifies the set-up within milliseconds and adapt to the conditions of the surface where we spread at that time. Currently, only electronic equipment can be compared to the BMW R 1200 GS and the Aprilia Caponord 1200. Just great. In character, the 1190 KTM Adventure is the closest.

Compared to the 2012 version, the new Multistrada 1200 S has gained much. It is easier to drive; it transmits more security and longer tends to open in the turn. The new suspension Sachs makes it less rigid, you do not need as much “hard” to understand and is much more “friendly” to the driver, considering that it is still a Ducati. The front is on rails and trust in what happens in front and is total. To get on the Multi with the engine off you will be strange not less in height (the suspensions are kept rigid), but as soon as you give to contact everything back to normal.

Still, the Multi is still the maxi-trail that requires further adaptation of the dozen of options on the market. The earth is not its favorite field (weight and penalize tires), the two-cylinder generates enough heat and operate the menu with the buttons on the left pineapple is not very intuitive. Living with these little details, enjoy an amazing machine, MULTI faceted and chassis behavior at the best of the market.