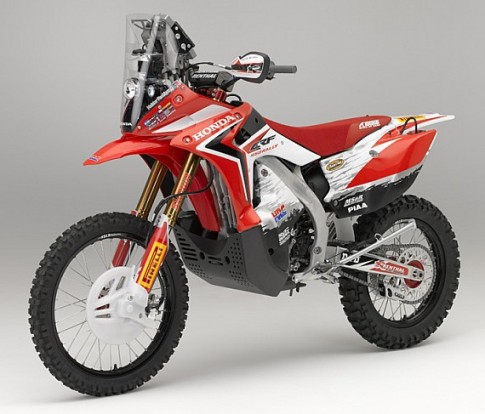 Next January Honda will compete again in Rally Dakar, something that did not officially since 1989 with the successful Africa Twin and NRX 750. For this occasion has developed a new model just introduced at the Intermot Show in Cologne.

The Honda CRF450 Rally is based on the business model Honda enduro, the CRF450X, but also incorporates the PGM-FI fuel injection to ensure fuel efficiency and durability.

The model is currently under development, has already been tested in Japan, and will participate in its first race in the Rally of Morocco from October 14, with the participation of the Honda pilots of Rally Dakar to collect data, identify potential problems with the machine in actual race conditions and identify any operational aspect.

The Honda team for the 2012 Rally Dakar will consist of the 11 time champion of the Baja 1000, including the U.S., Johnny Campbell, who will join the 4 pilots already submitted, Helder Rodrigues, Felipe Zanol, Sam Sunderland and Javier Pizzolito.