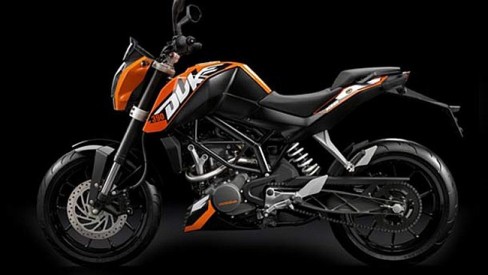 KTM presented the fourth version of its range naked DUKE, equipped with a 375 cc single cylinder mechanics. Its 44 hp will make it possible to drive it with the A2 license. Although its name was now 390, by familiarizing itself with the other models 690 and 990, the engine would have a 375 cc single-cylinder, 4 valves, injection and 45 hp.

Official figures are not yet known, but it would be the basis of the Duke 125 and 200 cc, i.e. aesthetic naked aggressive, multi-tubular steel chassis, reinforced swingarm, WP suspension and Brembo brakes. The estimated weight would be about 150 kg.

It is clear that the collaboration with the Indian giant Bajaj Auto initiated at the beginning of last year, with the Duke 125 is paying off. Like these, the 390 would be manufactured in India, with strict Austrian quality controls.

Those who liked the little Duke, but neither needed the services of the 690, will have another interesting option.