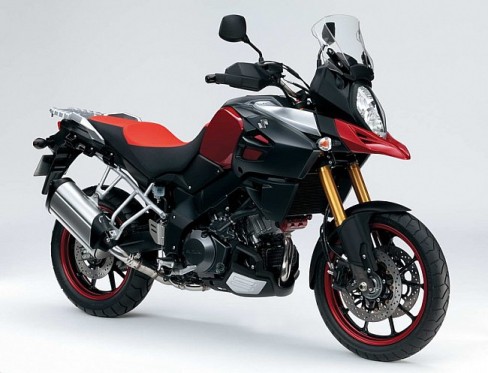 Leveraging the Intermot Cologne Show, Suzuki has unveiled the prototype of which, presumably, will be the V-Strom 1000 of 2014. The maxi-trail Hamamatsu will return to action in the future. Against the strong rumors that presaged an aesthetic similar to its sister Suzuki V-Strom 650, the new trail reminded the newly introduced 2013 BMW R 1200 GS. The Suzuki has been completely redesigned, compared to its predecessor.

From a visual starting point, new V Strom is thus established itself as a tourist/adventurer. Its 1,000cc V2 engine has been completely redesigned and now includes traction control for peace of mind during driving, the details of whether it will be removable and the final power of the new thousand is still to uncover.

Beyond the engine, chassis aluminum painted black gives the bike a distinctive style in addition to a more aggressive than the last. The wide seat, adjustable screen and 10 poles wheels give this bike a personality.

Suspension tasks are now assigned to an inverted front fork already a mono both adjustable rear shock absorbers although it is not clear to what extent. Brake calipers with radial mount ABS will provide effective stopping power with the popular soft feel of the brand.

With these changes Suzuki has turned its gaze to the growing market of adventure touring currently cornered by mounts as the 1190 KTM Adventure, BMW R 1200 GS and Triumph Tiger Explorer.