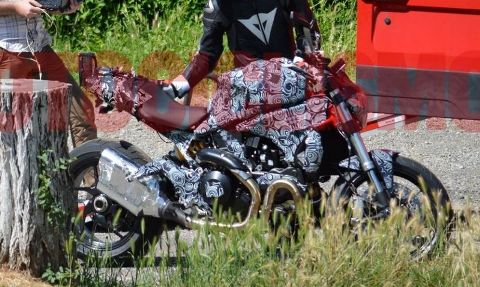 It seems that the Italian brand is preparing a new version of its Monster family facing the EICMA show in Milan. The last naked bolognese would incorporate the engine of the previous 1198 water-cooled already seen in the Diavel. The Italian web magazine has published spy photos of what could be the fourth variant of Ducati Monster. A version that exceed the current Evo 1100 and it would have the same engine as the Diavel. It is assumed that all the electronics also incorporate art Bolognese brand as traction control, ABS, triple power curve, etc.. By the color of the bottles of the fork, it does not seem to equip the electronic suspension Sachs DSS of the Multistrada 2013. As can be seen in the photos, all deposit-tail follows the lines of the rest of Monster, while the tilt-escape Diavel maintain a clear inspiration.

No doubt, the main change is the addition of 8-valve twin of 1198, with a power that would be around 140 hp. Currently, Ducati and markets its Streetfighter S of liter with an output of 155 hp, making the new Monster variant would become a “naked” softened somewhat.