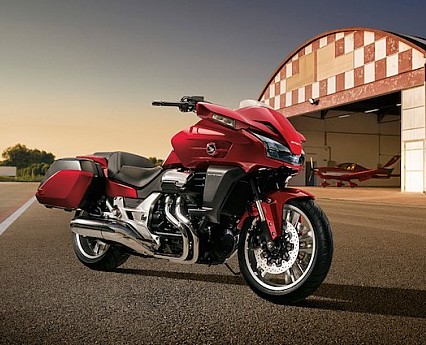 Honda has announced that one of the most spectacular 2014 announced by mark for this season, the CTX1300 is now available at their dealerships. With the V4 engine derived from the Paneuro, the CTX is a powerhouse of technology and you can already get your hands on it. Submitted in the last Hall of Milan, the CTX 1300 is now available in the Honda dealer network. Mount the V4 engine to 90° longitudinal of 1.261cc derived from the Paneur, which has undergone major revisions, increasing torque at low and medium engine speeds.

The maximum power has been reduced and touch and sound characteristic of the V4 engine have amplified by means of the 4-2-2 exhaust system. A revised time distribution and new PGM-FI injection bodies are responsible for the change in the power delivery and the behavior of the engine. In the end, it delivers 83CV (which makes it possible that Honda prepares a limitation kit for A2) at 6,000 rpm, with an impressive 106Nm of torque available at just 4.500 rpm.

Throttle response is tuned to be smooth, with a rewarding acceleration. The total rate of change is long, reducing engine rpm and thus contributing to a relaxed and enjoyable way. The 5-speed gearbox and hydraulic clutch move the rear wheel via a universal joint.

The fuel tank of 19.5 liters is located under the seat, lowering the center of gravity, and consumption of 17.2 km/l (WMTC) allows a range of over 330 km between reports.

A new steel frame, double cradle, 43mm inverted forks, dual rear shock and aluminum swingarm are the core part of the cycle. The brake system used combined ABS and Traction Control System (TCS), of Honda. The body, modern style of the CTX1300 captures attention with its long, low image, adopting features of the stunning Gold Wing F6B. But in the CTX has also sought that is practical and easy to handle, with a low seat (735mm) and a natural riding position, something that will help with its 338Kgs low speed in running order.

Impressive to see which comes standard with dual stereo speaker supports Bluetooth, heated hand grips with five positions and, of course, the two integrated panniers. Despite its image as custom-futuristic, the CTX seems to be good bike and especially on long trips. And as always, Honda already has prepared a long list of original accessories with further adjust to taste this spectacular CTX 1300.

Available in metallic black, pearl white or red, the price is set at €18,699.