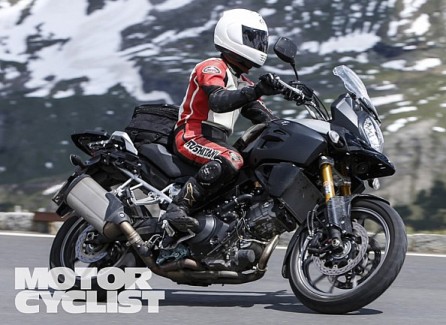 What looks like the final version of the Suzuki and was last seen in a test session in the Alps. The Concept DL 1000 is definitely the new V-Strom 1000. A few days ago hear that the new Suzuki V-Strom 1000 was ready to be presented in the next Hall of Milan, now we can see it up in a spy photos published by the American Motorcyclist web. As seen in the pictures one of the test pilots Suzuki wheel with what looks like the final version, the only thing left to renovate.

The new V-Strom uses a revised version of the twin-cylinder engine to 90 degrees which was already riding. What is new is the dual beam chassis, also sub chassis and all plastics, which include the “duck beak” very front line of its current competition.

The long chassis ensures a number of interesting things on a bike in this segment as the passenger comfort, some good anchorages to install the side cases. Be warned (or already know) a fuel tank very capable and a windshield height adjustable and fully adjustable fork, aluminum swingarm wheels and 19-inch front and 17 rear.

There are details that show the ABS system. The use of a traditional throttle (instead of a ride-by-wire electronic) would significantly reduce its price in what appears to be one of the assumptions of the model, offered as a cheaper along with the Kawasaki Versys 1000.