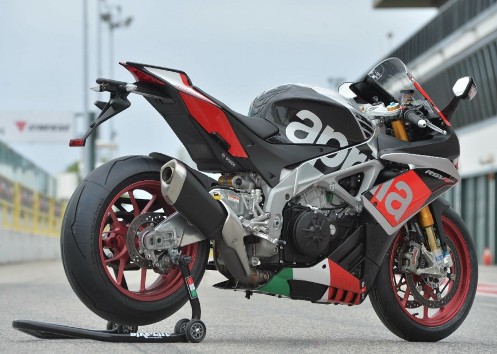 Of all the sports market, The Aprilia RSV4 has always excelled in the overall balance, for as short could transform into useful thrust each horse of his V4. On the other hand, numerous world titles are not a case, as even the statements of enthusiasm of the pilots after trying it. And the latter RF appears to have reinforced the dose, having been remodeled just where needed and with a single purpose: to lower the clock in lap times. It starts with the riding position, less hanged thanks to semi handlebars higher and wider. It is not a concession to more comfortable tourism: simply, after a series of tests and back on track, the engineers have decided to go stronger for longer was better that as well. And now: the feeling of extreme compactness already retarder (seems a little bigger than an old 250 2-stroke…), the RSV4 RF now also has two half handlebars that give a feeling of control. And this is nothing…

Hard to say exactly how much and where the RSV4 has improved, but one thing is certain: it is a better bike in every situation. It was considered as valid the old; we can certainly speak of an excellent result. The engine, now given for 201 horses, has dispensing very similar to the previous V4, with the pair already important mid-range that extends throughout the rev range.

Everything, it must be said, accompanied by a soundtrack worthy of a racing bike. Now, however, it pushes with greater conviction even beyond 12,000 rpm and until the red area at an altitude of 14,000, although the range of optimum changed remains at around 13,500 rpm. The problem, if problem can speak, it is that the V4 is a long way without peaks or steps in the delivery; in other words, it seems to go slower than it is in reality. But do not be fooled: the speeds achieved sidereal, and straight to Misano are devoured in seconds. It is also improved in braking, the RSV4: in addition to the power plant, remarkable, thanks to touch-ups of up to level of geometries (distance in particular) remained agile and quick in jumping to the rope at the same time has gained a lot of stability, especially in curved entrance. Even trying to force their own pace delaying braking there is little to do in the motion remains in structure composed also with fork package, for more thinks while pulling toward the point of cord to a speed disarming. And attention, all this with the brakes still firmly in hand.

About the inherent compactness and lightness as engine brake reduced to lowest terms, which flows out the bike in a very natural way. Chapter electronics, needless to say the package RSV4 RF close to perfection: personally, I do not you ever try a Traction Control as effective and functional to simply move forward as quickly as possible.

The perceived, if at all, is to have a perfect control of gas, about the Traction (which also takes a piece to your any virtuosity) and a Ride by Wire system exquisitely calibrated. In addition, there is now an anti Wheeling really effective, with the front wheel which is fixed to 10 centimeters from the ground scarce while the motorcycle is moving forward without stopping. Ok, all well and good, but what it seems to be described by the pilot profession. And here is the trick: thanks to a perfectly tuned electronics and a stitched around the mechanical requirements of the biker, the RSV4 makes all this possible also to those whose surname is not Marquez but simple ambitions from fancier of the track. Forget the invasive electronic times: with modern sports, and even more so with the Aprilia, the electronic package for more fun and driving pleasure exponentially. Guaranteed.

If anything, for the bikers (but not only), there is now dedicated App with which to set curve after curve, depending on the circuit, the intervention of each parameter of the electronics from Traction Control. In fact, it’s like having a dedicated track engineer, but in this case it is your index to decide everything. The inconvenience? We should turn with the smartphone below. Better lock the SIM so must not be a pleasant sensation receives calls when trying to file down the 10th…