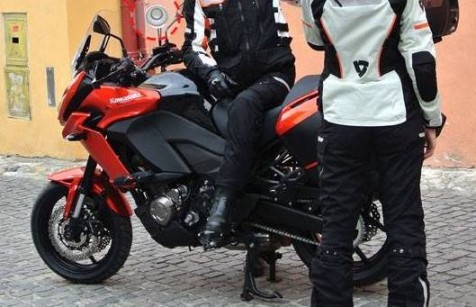 It seems that three years after its launch, Kawasaki is thinking about renewing its maxitrail. The body has been completely renovated to create a sportier image than before.

In full launch of its new beast, Ninja H2, we almost forgot that we can bring the rest of the 2015 2015 Kawasaki range. In 2012, Kawasaki introduced its bet maxitrail, The Versys 1000, to complement the versatile 650, akashi firm opted for a four-cylinder in line derived from the naked Z1000, suitably smoothed to 118 hp to better undertake its new work. The design of the bike was never to everyone’s taste, and therefore seems that it will change “dress” for the coming year.

The new plastics are more pieces than before, the aesthetic is sharper and more aggressive and really seems another bike. Despite not see the front, has a certain air to a Triumph Tiger Sport, mixed with a touch of the Multistrada on the sides. Still a motorcycle 100% asphalt, stick tires (17″ front) and aluminum chassis. Interestingly, the front fender is maintained.

Apparently, chassis, engine and part cycle remain the same, like the Tokico calipers and ABS system, which will surely be standard. Logic says it will continue to back the dual-mode steering and KTRC traction control system. Optionally, should be served with side bags and top case, as usual.