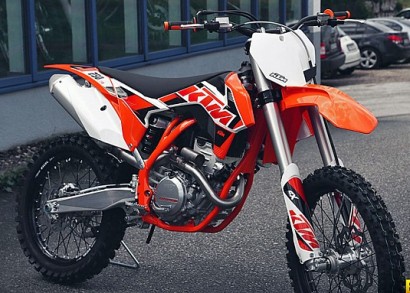 Although there is still time for the Austrian firm officially present the new 2015 models, a local website has posted some photos of the first units appeared to have reached dealerships in the country. We do not know how it will sit Austrian firm that nothing likes this new model, the owner of a local dealership has had enough to take pictures and post them on social networks, but the truth is that its spread is unstoppable.

Pending the official dossier with news for 2015 models, here’s a preview of what the 250 SX-F. The visible changes in this new version that will be released within few weeks are lower in a machine that can claim to be the last two Championships in the world of motocross at the hands of Jeffrey Herlings and lead this season after the double achieved by the Dutch rider in the Grand Prix of Spain played in Talavera de la Reina.

At first glance, the new tires are seen in black color with the Factory version, a smaller front plate, protectors of the new design fork bars and graphics of the tank and side plates where the target is gaining ground. The images come from the first units were delivered to the Austrian auto. The two and a half has been the first to arrive, but soon see images of the new 2015 KTM range.