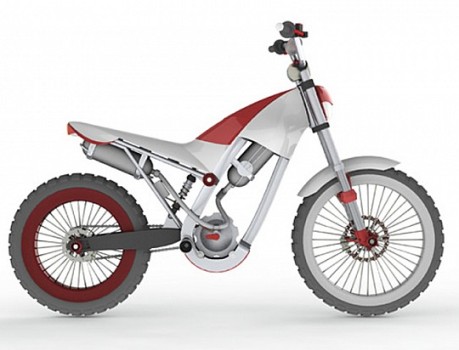 Industrial designer Bolaji Teniola imagines a complete system based propulsion of compressed air that would greatly lighten the weight of the bike.

Although it is only an idea and not has too many details about its operation, the project of industrial designer Bolaji Teniola explores the possibilities of a new propulsion concept bikes based compressed air. The system has been applied to a motorcycle on-off inspired by the Yamaha Tricker, that would produce a dual-use vehicle extremely lightweight. This would include three tanks of compressed air. Unlike conventional motors of compressed air, the system of Bolaji Teniola includes a rotary engine of air that would eliminate the vibrations as well as the internal wear, reduce friction and would produce more power. The compressed air propulsion system is a little explored both in the world of two and four wheel. Without knowing more details about the proposed Teniola, recent attempts to use compressed air as a propellant in automotive come from Citroen, which in the past edition of the Geneva Motor Show unveiled the prototype C3 Hybrid Air prototype that replaced the usual electric motor and battery of a hybrid by a hydraulic pump and a tank of compressed air.

Previously, in 2010, Volvo and unveiled at the Los Angeles Motor Show the AirMotion Concept, a futuristic vehicle that was powered only by compressed air.