A Ford V8 engine to give life to a bike 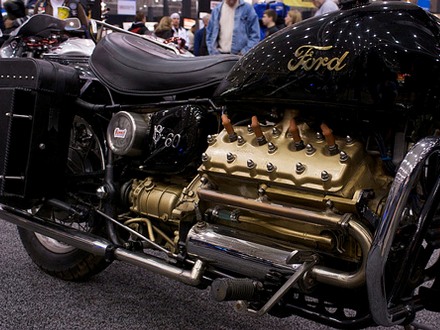 A Ford V8 engine to give life to a bike

This is probably one of those creations whose originality is in parallel with little use of the invention. It’s a chassis that have gone by attaching to the other motorcycle parts and in which the true protagonist is a V8 engine which comes from a 1937 Ford. At first what is striking to see this machine and its obvious is its engine. With a gold finish gives a classy look, the V8 engine of a 1937 Ford with power looms with four cylinders and appears lateral power, but nothing is further from reality. This jewel created based on patches only pays 68 hp, a figure that seems fair considering what might render a more modern V8.

If the fact to fit a car engine on a motorcycle chassis is not easy, because it has less power to be putting a 5-speed gearbox from a Moto Guzzi engine. It is clear that the laborious operation compensates for if it appreciates the weight that has been saved to the whole, since any gearbox of a car is quite heavier than a motorbike.

Moreover, this “Ford” has added different components coming from other bikes. The tank belongs neither more nor less than a Honda 750 and stores fuel which then passed to Stromberg Carburetors. As for the front suspension, this vehicle makers have relied on pieces of a ’48 Indian Chief’. As for the handlebar, was used one of Harley Davidson, while to finish this authentic “tatting”, secondary transmission and rear fender belong to another Moto Guzzi .

Probably it is not a question of the fastest bike, nor talk about which consumes less than 100, even can be tough. What is out of place is that this bike powered by a Ford V8 of 1937 has all the character needed to be a legendary motorcycle.