A spy photo reveals some details of the Ducati Scrambler 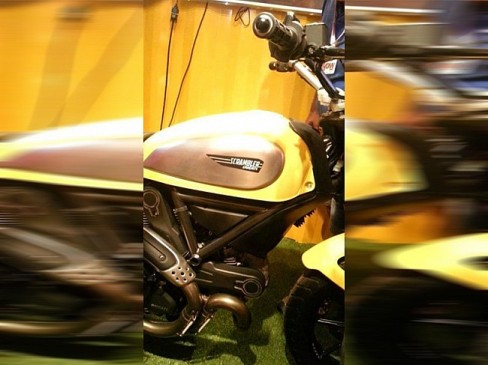 A spy photo reveals some details of the Ducati Scrambler

Although Ducati has worked hard and put everything in their power to make the new Scrambler do not see the light before time, got picture in the WDW 2014 has invaded the network which obviously is the tank and the chassis and engine of the Italian machine. Few conclusions can be drawn on the matter more than that secret does not exist… On the occasion of World Ducati Week 2014 in Ducati decided to show what will be one of the new machines in the near future, the Scrambler remodeled. In small and select groups of less than eight, the guests were going to see the machine. As is obvious, the entrance to the grounds with cameras, phones, tablets, PDA and other devices capable of capturing images was totally restricted. However, only a few days after the WDW has closed its doors, has begun circulating on Facebook a supposed image “stolen” from the new bike Borgo Panigale.

Although the definition is not spectacular and note that who took the photo i knew that I was not toward something correct, since the image is clipped, if you can see certain features of the engine. Highlight everything above a yellow tank with clear retro air, which highlights the brushed aluminum part thereof in which the motorcycle logo is located.

Few more data can be obtained from the image, removing that (predictably) it is a machine with tubular chassis signing of the house and out of the two collectors confirmed that this is a two-cylinder without any mistakes, to unlike older models, but it is something that was also clear from the first moment that Ducati announced its creation.

At the moment there is no confirmation from the Italian brand of power engine, which is seen air cooled, but all rumors indicate that it will be hovering around 80 horsepower and engine size will be between 750-800 cc.