Already on sale the Honda MSX125: a great little bike 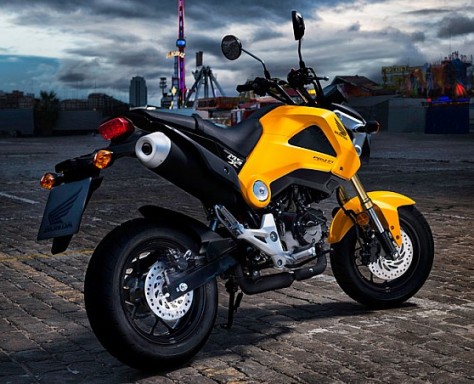 Already on sale the Honda MSX125: a great little bike

The small MSX125 inherits the spirit of the small bike Dax and Monkey. An original urban motorcycle very manageable that it can also lead with car license. Honda pioneered the development of small bikes. First with the Monkey and then with the Dax, converted bikes such mass scale phenomena in certain countries and even are objects of worship by coaches from around the world, especially Americans.

The MSX125 (Mini Street X-treme) returns the myth of the small bike, even if they are the same as before with minor tweaks, this is a completely new bike.

The column type steel chassis has been strengthened and modified to provide good driving behavior, even with a passenger. That companion is carrying one of the novelty of the model. The idea is that the driver has the feeling of carrying a bike of dimensions that can be considered normal. It is extremely handy and lightweight (weighs just over 100 kg), and anyone can hit the ground.

The little 125cc 4T engine has been renewed completely on the inside, in fact is very similar to which is equipped with the Honda Wave. It has PGM-FI electronic fuel injection, used low friction technology and reduced inertia of the crankshaft to smooth power delivery. It has four gears and manual clutch.

Another important thing is that you can take with car license. The Honda MSX is now available at all Honda dealers at a price of 2,999 euros.