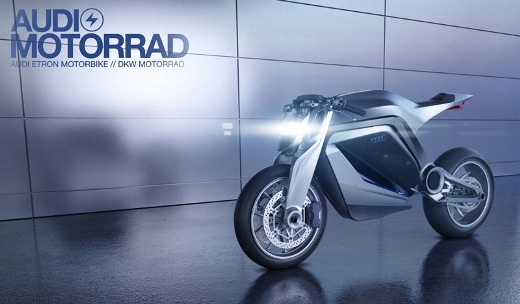 French designer Thibault Devauze imagines how it could be a replica of Audi to BMW Motorrad sport bikes. It would have hybrid drive thanks to a twin engine and an electric motor. Buying Ducati by Audi was the logical step to move the rivalry with BMW into the world of two wheels. Another thing different is that Audi decides to place their gleaming four rings in a future range of two-wheeled models leveraging technology acquired with the purchase of the Bologna manufacturer.

The Audi Motorrad Concept shows where the shots can go in this sense. Responsible for the design, Thibault Devauze, with experience in both the german brand as in Ducati, was inspired by the old DKW to create a prototype with twin engine of the Italian brand. Although the nickname e-tron (the electric franchise and Audi hybrid) demonstrates unequivocally that electric propulsion is somehow linked to the prototype. It is no coincidence that this Audi Motorrad Concept is configured as a naked sports without compromise, with the handlebars too low, sharp tail and a front fork really futuristic whose operation is not very clear, at least for now.

In short, there is also to assess the possibility that the transfer is not necessarily technological of Ducati to Audi, but in reverse. The signing of the four rings stands out for its ability to build lightweight aluminum chassis and technologies have almost unprecedented in the world of the bike and the energy recovery system braking and automatic start and stop.