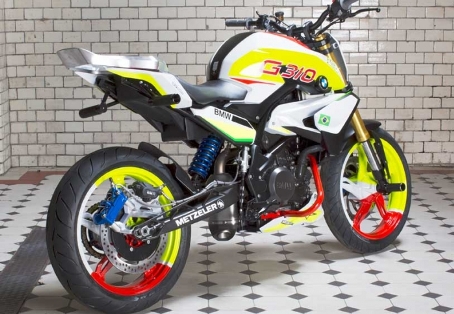 BMW has unveiled its future small-displacement naked bike, The G 310, with cylinder engine.

We have already seen spy shots of small BMW naked type, with single cylinder engine of about 300cc or 400cc, but now when it becomes official, but still a prototype, The BMW G 310. This is a bike radical image (stunt, define the Germans) with an engine that has the head rotated 180 degrees, with the admission by the front and the exhaust outlet from the lower back with vertical outlet. The cylinder is inclined backwards. The chassis is tubular, inverted fork and has 17-inch wheels. In the next Hall of Milan we expect to see the final version.

This new bike will be the first model that is born from the union of BMW with the Indian giant TVS, who will be the one in Asia to produce the smallest of the German motorcycle. And then sell it, not only in Europe but around the world at an attractive price. This approach is not new; in fact KTM already uses such a strategy for years with the Duke smaller than in the case of the Austrian brand Bajaj manufactured in India. We must not forget that the same BMW engines mounted on its single-cylinder GS that have been manufactured in China.

Still missing some years until this prototype to the stores, but it is clear where the shots go in the strategy of BMW. The German manufacturer aims also to much-touted globalization, producing in Asia for the world. Harley-Davidson, Triumph, KTM, each brand in one way or another has decided to manufacture in Asia where growth opportunities are almost limitless.

Cooperation with the company TVS Motor Company in Chennai (formerly known as Madras) is booming. The Indian manufacturer produces there two million units per year, a figure of scandal compared with 120,000 BMW motorcycles manufactured annually.

The plans of the Bavarian brand are clear and are going for market share of KTM, which is enjoying unprecedented success with small KTM, especially with the 390 Duke, which has sold great in countries like Germany.