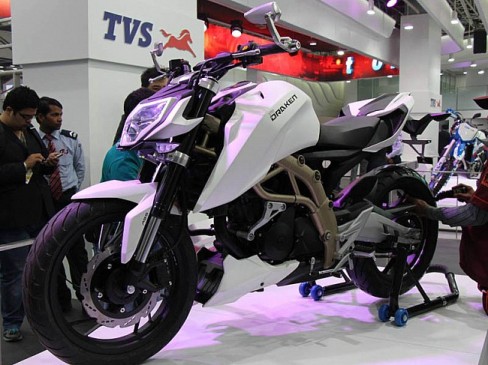 The Indian market is an essential piece in the accumulated annual sales from leading manufacturers. Now, BMW joins the war launched by Honda, KTM or Kawasaki by TVS India, who will manufacture small-displacement models. As already advanced in May last year, BMW and TVS go on sale a naked sporty of small capacity within two years. The agreement between the two companies, sealed in 2013, will allow BMW to be present in the Asian market with frames less than 600 cc.

The new naked sport could be inspired by the TVS Draken looked at Auto Expo show in New Delhi in February. The model would use a single cylinder water cooled engine that would be about 40 hp to 134 kg, with 10 liter tank.

KTM was the first European to realize the importance of sell and manufacture there thousands of motorbikes each year with the Duke 125/200. Japanese brands also have 300 cc naked with which to face the bajaj Pulsar, one of the leaders in the market. Until Triumph announced in Milan last show which is also involved in a project of 250 cc.

TVS Motor Company is one of the largest manufacturers in India with annual output of 2 million units and a turnover of over 1,000 million. The company has presence in over 50 countries in Asia, Africa and Latin America.