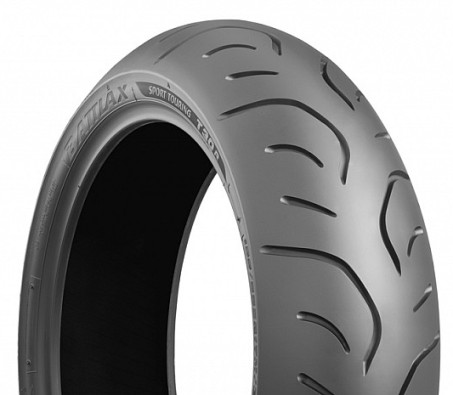 The Japanese company Bridgestone launched their new tire Battlax Sport Touring T30, which replaces the previous BT023. It will be released in Europe in March 2013. The substitute of the BT023 announced greater dry grip thanks to a new compound, design and construction of the tread, optimizing for increased stiffness and contact patch. The T30 is the first tire BATTLAX tourism segment called T (Touring), added to the S for “Sport” (Sport) and R for “Race”.

“The new BATTLAX T30 provides the motorists the royal pleasure of travel: giving them a quicker steering response, allowing them to maintain the direction they want at any time, providing security to lie” : says Vincent Van Houtte, Bridgestone Europe Motorbike Tires Product Manager.

Bridgestone has designed the new compound for the T30 based on the process used for MotoGP racing tires, i.e., measuring the temperature range in which the tire should operate, and thereafter developing the optimal compound match that range. For the construction of this tire has been used a simulation technique called Bridgestone FE (Finite Elements).

For the design of the tread, Bridgestone has developed the front tire with “Y-shaped grooves Greek” (straight in the center and sloping toward the shoulders) giving a quick steering response. The design of the rear tire combines a lesser degree of drawing in the shoulders with furrows in the form of “swirl”, providing better contact and inclination in the curves.

In internal tests made compared to its predecessor, the BATTLAX BT023 to T30 showed improved maneuverability and driving easier, providing motorists the royal pleasure of travel. There has been an improvement in the driving, the grip and manageability in curves in dry, decrease the benefits in the wet.