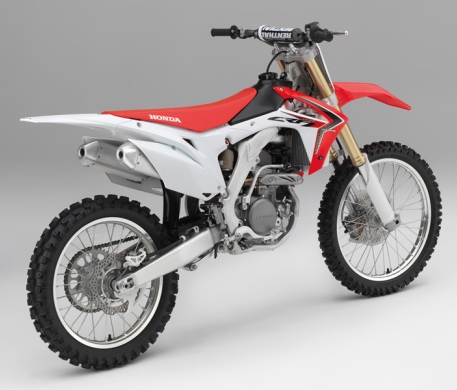 The CRF250R has been completely renovated with improvements in the chassis and the engine, while the CRF450R incorporates a revised single cylinder to optimize the touch on the rear tire. In the wake of the major refurbishment of the 2013 CRF450R, Honda presented the 2014 CRF250R novelties as twin-spar aluminum sixth generation, developed from scratch with the aim of optimizing mass centralization of the bike. The quarter-liter model also introduces two silent rear key in improving weight distribution.

The engine of the Honda CRF250R has increased both its power as torque delivery in the range of medium and low revs. As for the chassis, there have been improvements in inverted forks of 48 mm Showa and incorporated a more compact Showa rear shock, revised Pro-Link suspension and redesigned aluminum swingarm for greater traction and improved manageability.

The 2014 Honda CRF450R has received for his part basically changes in the engine, focused on providing a more direct connection with the rear tire and feel of the pilot increases relative to available grip. First, the torque of the single cylinder has been strengthened at low revs. It has also incorporated the new injection sequence and a double Dual silencer updated, while the clutch incorporates lighter springs.