Crosshelmet X1, price and all the details of the helmet that wants to revolutionize the sector 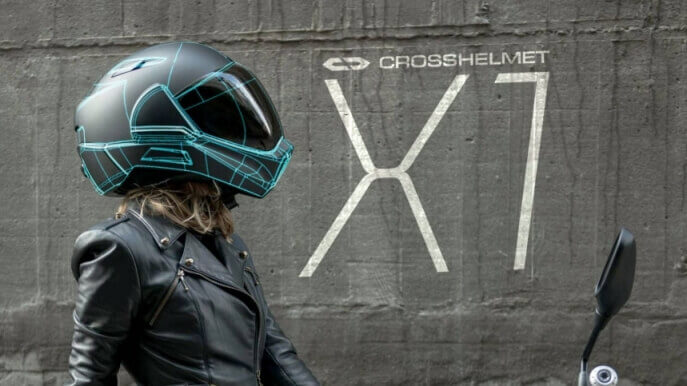 Crosshelmet X1, price and all the details of the helmet that wants to revolutionize the sector

When we talked about the Crosshelmet X1 a couple of weeks ago, the interest aroused by this helmet that aspires to revolutionize the industry was enormous. Tens of thousands of readers, more or less critical, were interested in this project born in Tokyo. The idea is not new, we already live a similar experience (at least in part) with Skully, but the way of carrying and advertising is. When we discovered it we did not take long to contact them to get us all the information before its Kickstarter campaign started. Today, with the campaign already in operation, we can talk publicly and without problems of the details that this model contains. The most distinctive element of this Crosshelmet X1 is undoubtedly the 360° field of vision it offers. This is possible thanks to the camera inserted in the back of the helmet and to the transparent (and foldable) head-up screen that is placed inside the helmet, at the height of the forehead so we can see what we have behind just looking towards above.

The camera covers an angle of 170° with a resolution of 1280×720. The best of all this is obviously that the dead angles disappear and that one, if you wish, could consult less regularly the mirrors, assuming you see more than your own elbows. By using this screen in which to display different elements, Crosshelmet has taken advantage of to display information of all kinds like GPS navigation (step by step, with several destinations to mount your routes, distance and time to the final goal), a compass or the weather forecast.

To handle this data properly and to synchronize the helmet with your smartphone (iOS or Android) is responsible for processing a dual core 1.2 GHz Cortex A9. The advantages of using a telephone next to the X1 are several. They have developed an application for Android and iOS to extend the range of use and possibilities. One of the most curious points is the CrossSound Control function, in other words, an ambient sound control. With it, we can choose which sounds or noises we want to silence and which to listen with more attention thanks to a filter of four channels. Configuring our needs we can eliminate the noise of an urban area, the shooting of the cars, the wind … but still letting in the horn or an emergency vehicle siren. In the app, we can save a certain configuration to use when we want. Functions like this can be enabled them to easily deactivate from the touch panel of the helmet, without having to remove the phone.

The second aspect to take into account is the possibility of creating groups of conversation, with or without helmet Crosshelmet. That is, we will be able to talk with friends or fellow travelers without extra accessories while riding a motorcycle. And as for navigation, the app will allow you to download offline maps and use the GPS location of the helmet, saving battery of the phone.

In addition, this synchronization includes the possibility of being able to “talk” with Siri or the Google Wizard to control certain functions such as making calls, responding or listening to music thanks to the internal speakers.

The curious shape of this helmet will also have caught your attention, right? They tell us that in addition to including the above-mentioned advances, they wanted to offer a more comfortable experience without risking the security of the user. This outermost oval shape translates into a field of vision 30% greater than in a traditional helmet, in addition to a larger space between the screen and the nose and mouth, keeping the attachment at the chin height.

Being accurate, the X1 measures 363 mm long (more than normal), 274 mm wide and 315 mm high. The casing is made of polycarbonate and the hull remains at 1,780 grams, that is, just over 100 grams of what can weigh a traditional type helmet.

It will go on sale at a final official price of 1,799 dollars (1,530 euro) but can be purchased in the Kickstarter campaign for 1399 dollars (1,190 euro) but to a limited extent. The first 100 will carry two screens (transparent and dark), the following 200 orders can buy it for 1399 but after that figure can only be requested for 1599 before it passes the official price. An offer with two units is also available.

Who is behind this project?

It is inevitable to recall the case of Skully, the company that closed after its senior officials will spend the funds on personal luxuries. That is why we contacted the company’s founder, Arata Oono, to discuss the differences with the California company and this ambitious project. Is it legit? These are teams who have worked, for example, on the design of the popular Yamaha MT-09.