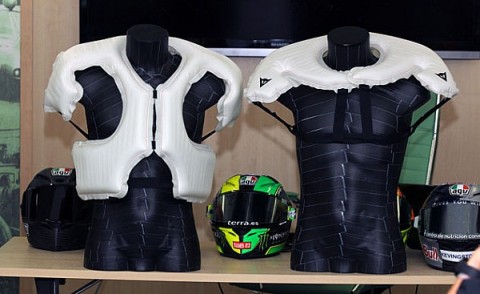 Dainese has just unveiled a new evolution of the system of security for D-Air pilots that are already using many speed lights. Based system designed for the street, the D-Air Street, which protects the chest and hits clavicles, the new D-Air Racing Thorax takes an airbag that inflates in 45 milliseconds and takes 85% of the force impact. Unlike the “Street”, this, designed for pilots, let’s take a more “racing” position on the tank of the bike.

The Dainese D-Air technology has also evolved. With a gas generator more capacity than the previous one, is using an electronic system to detect the fall and new generator maintains better tire pressure for added protection. At the time, the protected area has increased over the shoulders and collarbone.

We have seen riders like Jorge Lorenzo and Valentino Rossi “test” the original Dainese D-Air in real racing, but the prototypes of this new D-Air Thorax has been Luis Salom, the pilot of the Red Bull KTM Ajo, leader of Moto 3. He asserts that this new system has positively impressed him:

“The first time I tried the D-air Racing was in Jerez 2011”, says Solomon. “Now I like to use the new D-air is more noticeable because the protection not only of the shoulders, but also on the chest. The feeling of security is definitely higher”.