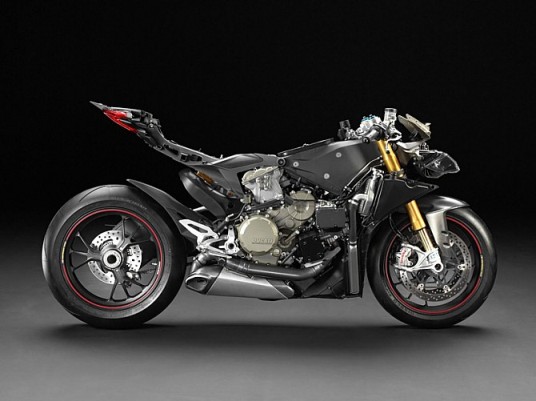 The Panigale is the latest Ducati 100% Italian, the fifth generation of a mythical saga between the mythical modern cool superbike. A symbol of pride for its creators. The Panigale is not one more motorcycle, is a sculpture in motion that will mark a milestone in the history of the motorcycle, something really difficult now when much of the competition to take enjoys a technological level of weapon.

Despite what shout purists, the slogan “renew itself or die” is very plausible in the Panigale, a model that has dared to push untouchable signs of identity back till now in the Borgo Panigale brand, such as multitubular steel chassis, the dry clutch or distribution by toothed belt (common in all sport since the 1979 Pantah 500).

Ducati proposes two versions Panigale, the standard (with Marzocchi fork and Sachs shock absorber by €21.467) and S (electronic suspension Ohlins NIX30 fork and TTX36 shock absorber, Marchesini’s forged aluminum wheels, carbon mudguard and optics of leds by €26.733). In both cases, the ABS detachable (about € 900 more) and data collection DDA+ are optional. In the S there is a special version “full equip” called Tricolore, basically for collectors, by almost €32.000.

Nothing will be the same
Before a bike so you should keep a cool head with each batch, take you it easy and learn from it. To boot, the noisy Superquadro two-cylinder of 195 HP and ultra-short career does that the whole world is turned, just the time needed to remove the heaters and bring out some juicy Pirelli Diablo Supercorsa SP of Superstock’s with a 200/55 rear! In stopped you appreciate also how long that is, and it is its new swingarm contributes to a wheelbase something larger than the previous 1198.

The Panigale S includes 3 power curve (Race, Sport and Wet), traction control (DTC), semi-automatic shift (DQS), Ohlins electronic suspension (DES), engine brake control (EBC) and an electronic throttle ride-by-wire that controls everything. Don’t want to clutter? Well, in addition to incubating the instruction manual as if it were a few oppositions, you must shoot in circuit until you drop to find your ideal configuration. With each of the 3 modes of driving is regulated in one way or another the rest of parameters, but as never rains to suit everyone, then you can adjust each one of these programs pre-established under your own guidelines. The sophisticated TFT screen of the instrumentation (anchored to a spider of magnesium) it says everything.

Part cycle 10
Aside from the power delivery of the engine in Race mode (in Wet “only” there is 120 HP), wild compared to previous Ducati, and with a brutal kick from 8,000 rpm. The engine is a marvel to be two cylinder. With respect to the chassis, the Italians have conceived a monocoque structure through which join the engine two independent pieces of aluminum (one to hold the landing gear which in turn makes airbox and another for the subframe) in the style of the Ducati MotoGP 2009-2011. Good part of its cure for thinning of 10 kg (164 kg declared in dry) compared to the 1198 come from there. The New Zealand John Britten engineer already uses this design in its V1000 racing 20 years ago.

Advance on the outside has never been specialty, but with the Panigale was breeze. The bike falls to the inside of the curve, it seems that there is no limit to the tilt and bumps or a crack without losing an iota of composure it is already possible. In addition to the proper chassis, the engine has been turned backward and forward, achieving an optimum weight distribution and a better focused mass thanks, also, to the location of the silent under the engine.All of this, together with the best suspensions of the market, adjustable without tools to the tastes of the consumer, make it sublime.

On the other hand, the truly special brake caliper Brembo Monobloc M50 are up to obscene. The braking at high speed are instantaneous and the radical decelerations.