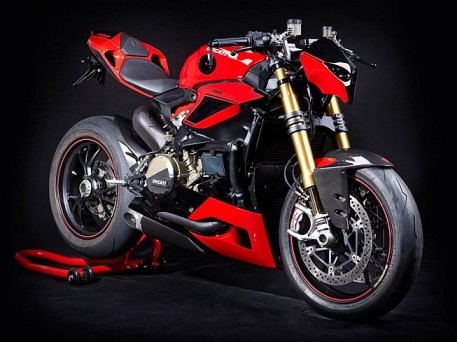 Hertrampf, German dealer specializing in Ducati, surprises us with a streetfighter version of the 1199 Panigale S, a more aggressive option for all those fans of the maxi-naked who are not satisfied with the Monster 1200. Many fans of the red mark will miss that Streetfighter 1098 (2009-2013) engine derived Superbike model for their aggressiveness and effectiveness. The bike disappeared catalog late last year with the S version, but the German importer of Ducati has made ​​its own recreation based on the current 1199 Panigale S.

A priori it wasn’t the ideal for this kind of bike as a peculiar the Panigale monocoque chassis may be strange if it were allowed to air. The case is that the Hertrampf kit, which can also accommodate the Panigale 899 not only fits perfectly but also serves as a stimulus for the Italian brand in case you want to recreate a motorcycle as well as in the future.

Keeping Superquadro 195 hp twin cylinder engine, Ohlins suspension and Brembo M50, have been replaced by a minimalist body mask and two side pieces that cover the chassis. It also incorporates a low rear counterweights, a sporty little number plate and LED indicator. It has left the bottom of the fairing and acting as a keel, and it has refined the set with a front mudguard and carbon clutch cover.