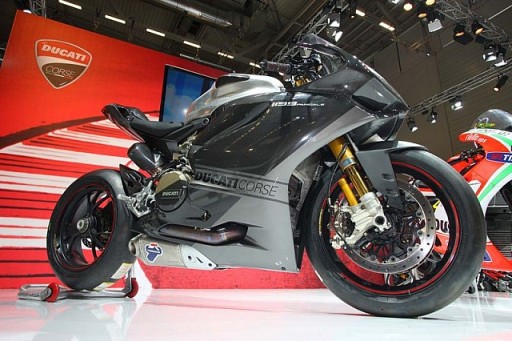 Ducati has just shown the bike that will struggle next season in World Superbike. After a year competing as a Superstock, the 1199 RS with specifications Panigale SBK is already list. In the hands of Italian Eddi La Marra, has been runner-up in the 2012 Superstock 1000 World Cup in its first year of official competitions. After a year of development in the “street”, Ducati factory has already prepared the fifth generation of its Superbike weapon. Carlos Checa and Davide Giugliano are responsible to fight for a title that surely this year will fall to Max Biaggi and his Aprilia.

Although they have not declared any information, yes can appreciate its carbon body and separate gas bottle just like the one used in MotoGP, and TTX shock absorber. M50 calipers, Termignoni titanium exhaust, forged wheels and aluminum tank apparently contrasted with a standard engine, making us think that the bike shown at Intermot Cologne is still developing. The most logical thing would be to think that 225 hp was really competitive.

Most would think that, now, with the support of Audi, Ducati have more resources and capabilities to achieve its 32nd World Superbike.