E-LisaBad: The future of the special is electric? 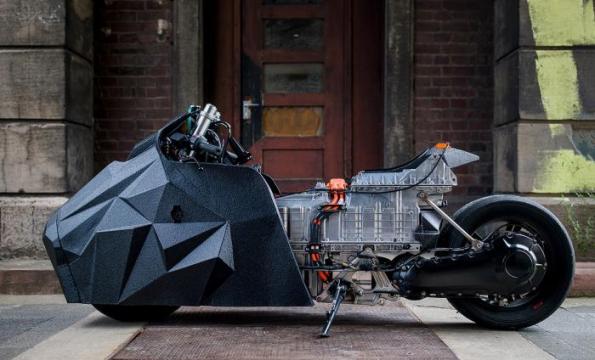 E-LisaBad: The future of the special is electric?

It is called E-LisaBad and has designed and built by Rolf Reick from Krautmotors, a workshop based in Heidelberg. Rolf has an industrial design background, and when he does not build special, he teaches product design and multimedia at Mannheim. A curiosity: E-LisaBad is a tribute to Reick’s grandmother’s name, or rather to the square shapes of anthea tea service, in art deco style and designed by Dane Erik Magnussen in the 1920s, so much to the mind of young Rolf when he went to find his grandmother. If you had any reservations about electric vehicles, this could eliminate them altogether. Is it just the right dress to make even the most modern technology appealing? Judge you: under the skinny superstructures, there is the BMW C-Evolution maxiscooter. Technically, almost nothing has changed because the propulsion/battery/transmission part is virtually standard.

However, stripped of the superfluous, it is lighter than 40 kg compared to the original. To run in sprint races, the trim was lowered and the rear suspension was removed by two steel bars to convert the special scooter to a rigid. A flat slick rubber at the rear offers the right grip on the asphalt where the sprint race runs.

Comfort is not contemplated: for a 200-meter firing it is not necessary, and the driver is virtually seated on the batteries, separated by only a thin layer of neoprene. There is, however, some fascination with the science fiction, the E-LisaBad. A faceted and opaque surface as the portion of a Stealth, the invisible radar-light aircraft, modernize the chimes in vogue in the MotoGP until the mid-1950s, wrapping the entire front, leaving the rear half of the naked bike. All the front is fixed on slides, allowing you to remove it in minutes.

Recalls in the past do not stop at the fairing: a small battery – which only serves to turn on the instrument panel and “turn on the scooter” – is mounted on the tail, with poles and wires exposed, discreet homage to the ending seventies Egli-Kawasaki Turbo. Even Rolf’s creative process has followed a classic process: E-LisaBad was not designed with sophisticated CAD programs, but was designed in pencil on a piece of paper and then handmade. Yet it is modern and innovative. A real revolution in the custom scene, not just for those who are pursuing high performance. The boss of Krautmotors says he wants to explore the less wicked ways of customization. We think it’s successful. And who knows where they will be.