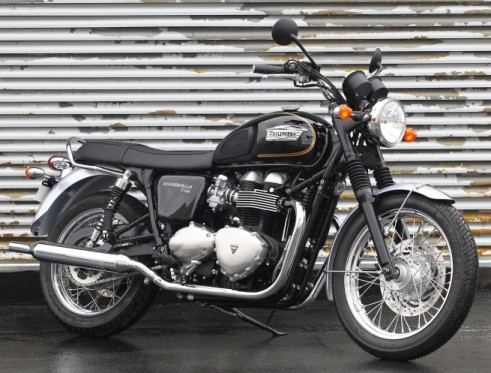 The latest model of the old Meriden factory rises from the ashes. The British firm celebrates the 1982 Triumph T140W TSS, the last representative of the first stage of the history of the British brand. Since John Bloor was made ​​with the British firm, has been a soft spot in limited editions of new generation based Bonneville (presented in 2000). The model-mark icon has donned the stylish creations of Paul Smith (2006), Belstaff & Ewan McGregor (2008), Tag Heuer (2009) and Tony Hawk (2012).

In 1982 the Meriden factory closed its doors forever and stopped producing the model that launched Triumph to stardom. Although some units under license granted by a company called Bloor were built Racing Spares in Devon until 1988, was never so real. So Triumph wanted to commemorate that model that marked the end of a glorious time preparing this special edition with a new color scheme in black, silver (fender) and gold (hand threaded tank) that give it a totally unique look.

Like the 2014 Bonneville T100, the Meriden Special Edition has the characteristic parallel twin 865 cc and 68 hp and a new design of quiet with improved sound delivery and chromed handle for comfort and safety passenger. To complete this retro-style, the English saddle looks like a sleek black finish on the piers of the dual rear shock absorber and in the rearview mirrors, while the camshaft cover the style of the old rocker covers, and the covers of the alternator, the clutch and pinion are presented with a satin brushed finish.