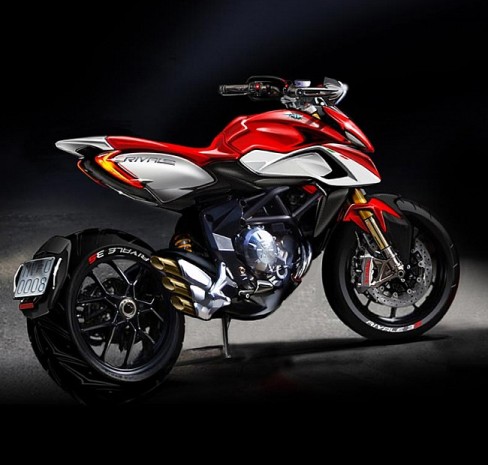 For the first outline published of the MV Agusta Rivale is appreciated and its aggressive forms of the supermotard style that will be one of the most eagerly awaited developments. As in the case of MV Agusta with the sketch of the spectacular Rivale which will be presented in the EICMA.

The Rivale share the same 800cc three-cylinder engine that also incorporates another new MV Agusta, the new Brutale 800. This engine has been developed from the F3 of 675 cc and maintains the three showy exhaust outlets at the side. It also inherits the trellis chassis, mark on the Italian firm.

The front with high flat handlebar stems makes us clear its supermotard style and reminds us the Ducati Hypermotard, which we hope to release 848 version that will beat the market.

While the rear license plate and the rear lights, its share Ducati Diavel design. Although it will be at the EICMA when we see live and rule its resemblance to the models of Borgo Panigale.

What we do see clear with only the outline is that its chassis is of high quality, inverted forks, Brembo brakes with radial calipers, single-sided swingarm, perhaps lightweight wheels, or set aside for a later version “R”.