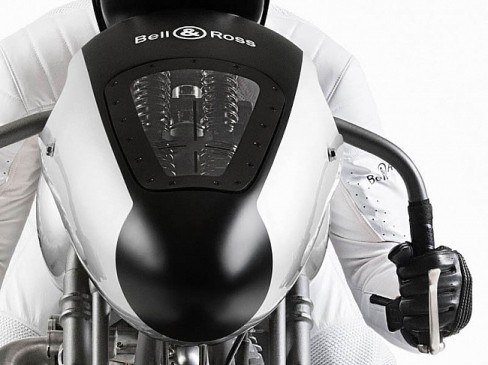 The Parisian firm specializing in aviation inspired watches just released the B-Rocket, a model that enhances its image thanks to “Aerobike” Harley engine built by British maker Shaw Speed ​​& Custom to promote it. Bell & Ross has ordered to construct a bike with the image of their new watch B-Rocket, which is exhibiting at the Baselworld fair (Switzerland) this week, the largest in the world to watches and jewelry relates.

The preparation of this bike has been on the British maker Shaw Speed ​​& Custom, one of the best specialists in Europe customizations with Harley based. The aesthetic is most striking, merging lines of aircraft prototype of the sixties with the famous American V-Twin mechanics.

The history of the brand Bell & Ross (acronym of the founders Bruno Belamich and Carlos A. Rosillo) began in 1992 when a team of designers and specialists of onboard instruments for the aviation came together to create watches suited to professional use. Its aim was to follow the great Swiss watchmaking tradition and manufactured there since 2002 (Chaux de Fonds). Currently astronauts, pilots or divers use these watches for their missions.