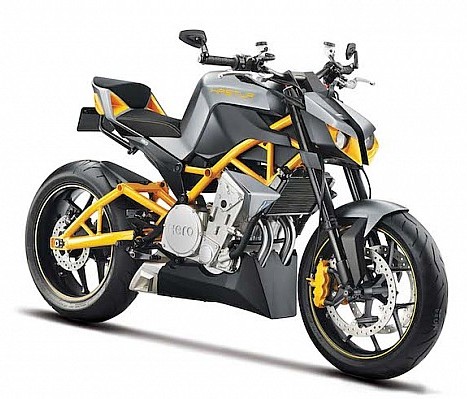 Hero is revolutionizing the world of motorcycling in India. Its presence at the recent Delhi show has been amazing and full of its original stand, strange and new bikes. Today we bring you an attractive concept that could reach the series. There have been more bikes on the stand at the Hero in that distant indian lounge: a single cylinder 250, direct competition of the CBR 250, for example. And also this spectacular Hastur 620, which reminds us of the KTM 690 Duke.

A multi-tubular steel chassis with a 620 cc two-cylinder engine, self-built and for which they have counted on the support of EBR (Erik Buell Racing), their American partners. Suspensions entrusted to a rear cantilever system already inverted front fork, with radial brakes and aesthetic beyond what is aggressive, but certainly original and attractive.

Of course, used electronic fuel injection for food, LED lights and other examples of technology “of the 21st century”, pointing to a possible series production for marketing in USA and Europe. Also draws attention to the use of a contracting crankshaft as striking to avoid vibrations and achieve greater dynamic agility of the bike. Its 80 hp at 9,600 rpm to 160 kg held promise that Hastur also be a fun bike.