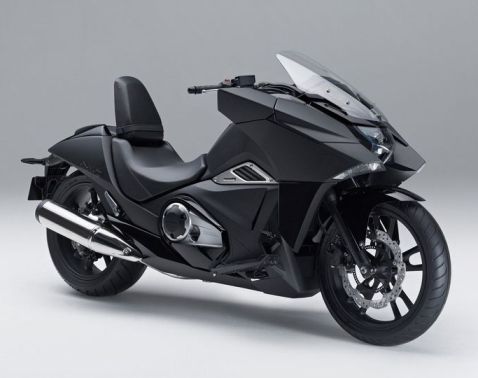 The successor of the former Honda DN-01 was made in Japan and the motorshow will be on sale in Europe before summer of this year. An automatic motorbike on the halfway between a scooter and a custom, perfect for fans of manga drawings. Taking advantage of the Motorhow that is being held in Osaka (Japan), Honda has announced the launch of the new and exclusive NM4 Vultus a futuristic motorbike court that no doubt fall in love with the lovers of the manga style and choose the option that would be a superhero. This is one of the most daring and exclusive brand proposals and the current market and will hit Europe in late spring and early summer.

The design follows the style of futuristic motorcycles seen in movies and TV series anime and manga, known as Japanimation, a mass phenomenon around the world. Vultus is Latin appearance, expression, or face. The manga and anime influences are obvious on every angle and curve, especially from the front: its width and angular “face” will never go unnoticed. Behind him, the driver is sitting in a cockpit surround, with the instrument panel digital always in view and reactive (with colors that change according to the chosen mode of transmission) and the folding passenger seat that acts as backup driver.

The lights are all LED, the front turn signals and mirrors integrated into the body, while the lighthouse is framed by a blue line LED. Everything is masked to the maximum (with a good number of details of stainless steel) and only has available color option: matte black.

Equipped with low-friction, twin engine comes standard with the system of Dual Clutch Transmission (DCT) used in other models like Integra 750, giving the driver a choice between automatic modes D and S; plus MT manual mode with a computer game controls to raise and lower gears style. Intuitive and easy to use, contributes to the futuristic appeal of NM4 Vultus.

Noteworthy is also the front wheel of 18 inches and the rear 17 “, with a width 200 mm rear tire. In addition, ABS comes equipped as standard.