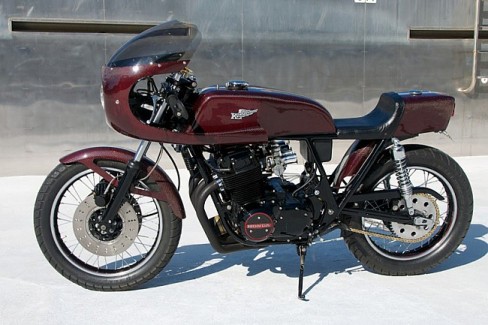 This creation of KG Cycles gives an authentic appearance Cafe Racer to the Honda CB 1974, have used carbon fiber and Kevlar in its new parts and some components were updated. The American Ken Glenn, owner of KGcycles is passionate about the Cafe Racer and artisanal preparations. So when he fell into his hands a 1974 Honda CB 750 in poor condition was very clear that this legendary model restoration deserved “special”.

AND is that Glenn was not satisfied with returning it to its original state, but it declined from its base to create a spectacular Cafe Racer. The first thing he did was to create a piece of carbon fiber and kevlar, tank, fenders, dome and pollock.

These pieces fit perfectly with the chassis polished and painted in black and give a successful aesthetic of Cafe Racer. In addition to the employment of carbon fiber and Kevlar gets lower the weight of the CB 750 remarkably.

Also improve other aspects have wanted to update the manageability of the CB, so he installed perforated brake discs, upgraded tires, new exhaust, front fork Cycle X, improvements in the ignition, has been replaced the wiring and hardware and have been polishing the carburetors.

These changes have not altered in any Cafe Racer spirit as they are perfectly integrated into the whole. Resulting in a spectacular motorcycle, that in addition to original and beautiful, it has to be much entertained driving.