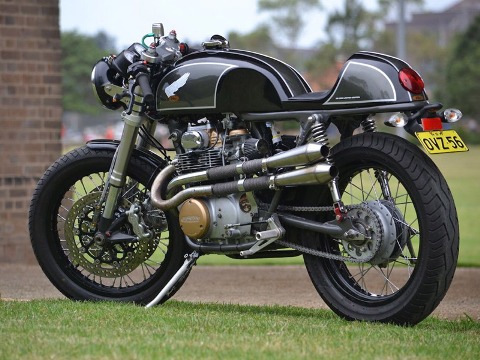 There are preparations that are worth looking to stay a while; this Honda CB350 is one of them. It knowledge converge do with good taste, a storefront cafe racer. This preparation comes from Sydney (Australia). It is the story of the “rebirth” of an old 1969 Honda CB350 and its transformation into a work of art. The bike “lay” in an old shed when the current owner bought it to restore it with its son.

The first was to remove it entirely and throw the pieces that did not serve. The second step was to remove dirt and rust 40 years of inactivity of the pieces that did serve. The chassis is made a number of changes, tubes were cut, parts were replaced and others were welded. The engine was also carefully removed and mounted and had to get some parts that had to be found on ebay. Added one Boretech electronic ignition and certain parts of the current electrical system.

The chassis is painted a metallic gray. The front tire, 2.15 × 18″, comes from a Harley-Davidson and the rear, of 3.5 × 18″ is also a custom. The front end, fork and brakes included, is a Ducati 848, which adds undeniable racing character.

Details like the dual exhaust, the fuel tank or the tail, besides the success that has led to the use of these colors, make this CB350 is one of the best preparations that have gone through this section.