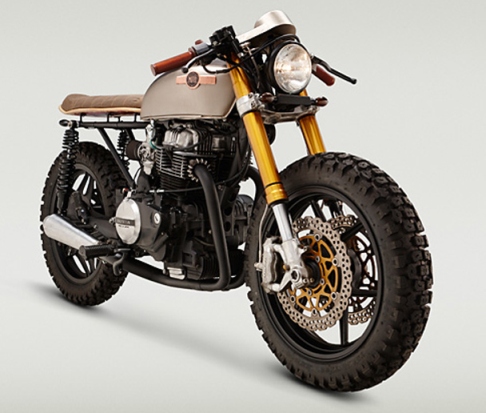 From the United States comes this spectacular and original cafe racer that uses a skateboard as a seat, in addition the skateboard comes with a drawing of a renowned American artist. This preparation confirms that the Cafe racer phenomenon is proliferating in the United States. This spectacular 1982 CB450 is the work of Justin Renard, a New York preparer borough of Brooklyn, which was very clear that he wanted the aesthetic line follow when working on this bike. Furthermore, it is particularly striking by the use of unusual materials such as wood and canvas.

The golden bar inverted forks, the triple clamps and brakes are from a 2005 Kawasaki ZX-6R. The dashboard anchor is handmade and holds a digital speedometer. The semi narrow handlebars leave no doubt of its cafe racer character. Original chassis is rather little, but still retains some part, the rest is all handmade. The engine is completely restored, has been equipped with an escape “two in one”, uni filter and a carburetor recalibration. The electrical system has been simplified, and has used a small lithium-ion battery for the most basic functions.

Perhaps one of the more subtle aspects of this preparation is the seat. This is a skateboard in which the bottom displays a drawing of the famous artist Kristy Heilenday, which has drawn a fox with a wrench in the mouth and on a mantle of rose petals. On the other hand has been upholstered by hand by an artisan of Richmond. The rims and tires are mounted mixed key points from the preparation.