Honda CRF250M: A supermotard for all audiences 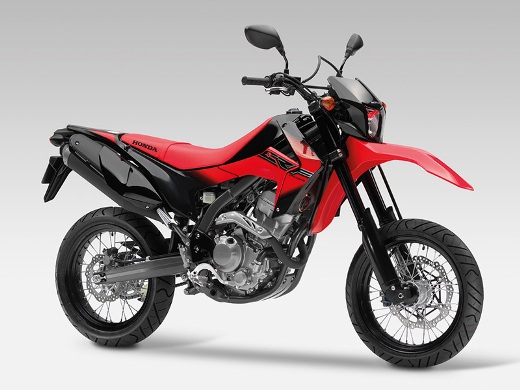 Honda CRF250M: A supermotard for all audiences

The signing of wing announces the launch of the the CRF250L supermotard version, with which it shares engine and structure. The 17-inch front tire and asphalt tires, in addition to the colors, are the distinguishing features with its twin trail. Honda has announced the launch of its CRF250L supermotard version. Aside from the obvious changes in the colors and graphics, the new ride supermoto wheels and tires 17 inches of asphalt.

It’s a bike that is directed to a wide range of users for their ease of use and to mount a “decaffeinated” 23 HP 4-stroke motor, motorcycle therefore valid for those who are in possession of the A2 card. On the other hand, the four-valve engine is a prodigy in terms of consumption, declared 2.94 liters per 100 km.

As for the chassis is well endowed, front mounts a Showa inverted forks of 43 mm and rear shock absorber has a progressive system, which will certainly provide a good road manners.

Yet nothing has been said about its price, but probably will be around 4500 euros, the cost of its twin with tacos, the Honda CRF250L.