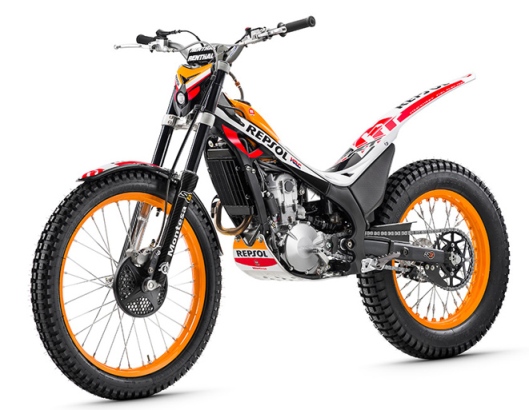 Leveraging Test Trial World Championship played in the Italian town of Barzio, Honda Montesa introduced the new Cota 4RT, a model that will be sold in standard and Race Replica. The Cota 4RT260 is a model developed with the participation of the race team and, without renouncing a high level of quality and technology, as well as an increase in performance, is presented as an economically comparable to motorcycles equipped with 2-stroke mechanical.

Moreover, for the most demanding customers, the Cota Race Replica, a limited series that offers the exclusivity that provides the high level of equipment and motorcycle image that dominates with authority all the competitions in the world.

Keeping compact thermodynamic basis Montesa Cota 4RT, if the already advanced engine cycle 4 stroke electronic injection receives numerous changes, among which increased to 260 cc displacement. The changes in the motor result in a clear increase in performance in a much more elastic engine more usable and powerful throughout the rev range. Furthermore, it has managed to significantly reduce engine braking, causing the motorcycle to feel much lighter and manageable.

Race Replica version inherits the image of the motorcycle world champion team, the Repsol Montesa Honda, while the 4RT260 returns to the red color Montesa with the manufacturer Cota dressed his most iconic models. Red is also present in the wheel hubs perfectly matched with the beautiful color anodized black wheels and polished aluminum frame. In both versions featuring the new fuel tank design, much more stylish and compact, but maintaining the sufficient capacity to be able to enjoy a long day of trial. In addition, the rear fender also features a new design, ending in a large and stylish finish.

Note that, like their predecessors, both versions will be manufactured in facilities of Montesa Honda, ensuring quality standards that has been always characterized the Cota 4RT model.

Although not yet released the price of the new Cota, Montesa Honda has announced that version 4RT260 could range between 15% and 20% cheaper than the current model while not yet announced any price for Race Replica version.

In terms of availability, both models will be on sale from next September.