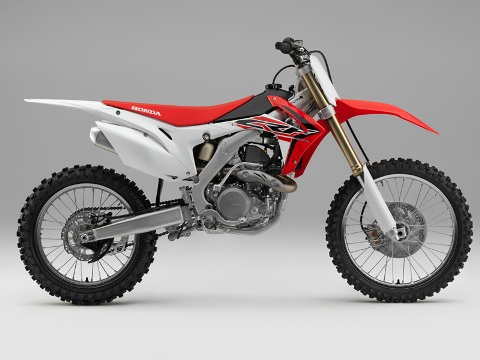 New motocross machines of the Japanese firm have significant developments both in the engine and suspension and chassis. Both models have a selector which varies power delivery as required.

Honda has already prepared its new dirt bikes. Meanwhile, we offer you the main novelties introduced by the signing of the golden wing, which are not few. Besides logic facelift, which in this case is almost negligible since limited the size of CR-F logo on the tank, the real changes are designed to improve engine response and the regulation of the front fork. In the 2015 CR-F 450 has been modified cylinder head and exhaust system with the help of HRC to improve power delivery at low and mid range. At this point with the help of new power selector, named EMSB (Engine Mode Select Buttom). By next to the throttle grip button you can choose between three responses. Mode 1: standard, mode 2: soft and mode 3: more aggressive delivery.

The maximum power announced by the brand has also increased, reaching 53.7 hp at 9,000 rpm. The front suspension of the 2015 CR-F 450 is entrusted to Kayaba fork assisted by air, with an evolution in which the weight has been reduced and the settings are changed. Now all are located on the top, next to the handlebar. In the front end has increased the diameter of the disc brake, from 240 to 260 mm. Behind, in the shock absorber also have been grouped settings, differentiated by colors. In regard to the 2015 CR-F 250, the fork is changed to the new triple Showa air chamber SFF-AIR-TAC , which dispenses with conventional springs and with which it has achieved a considerable weight reduction. Honda remains committed to the twin exhaust pipes, which in this case has an internal diameter of the tube. As in the CR-F 450, the front disc is 260 mm and boasts the EMSB power selector.