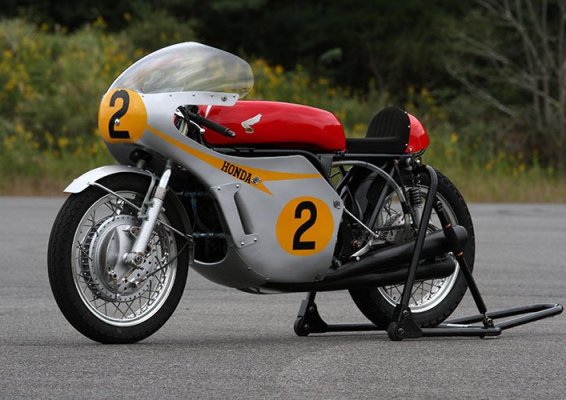 In the last 30 years Honda has been the manufacturer of the premier class (between 500cc and MotoGP) most important by impact and awards, although that status came not fallen from heaven. It was in 1959 when Honda made its appearance in the world, but it was not until 1966 when it made its entrance into the world of 500cc from the hand of the Honda RC181, in essence an adaptation of the Honda winners of 350cc to the category. Honda pulled the house through the window in regard to pilots, as it climbed into the then six time world champion Jim Redman and Mike Hailwood, who had won four consecutive world 500 cc with MV Agusta.

The truth is that the Honda RC181 was clearly the most powerful motorbike of the moment with its propellent 4 times of 499 cc and four cylinders in line that yields more than 85 horsepower to 12,000 rpm. The problem for Redman and Hailwood was the 151 kilos overland that the motorbike was giving in the scales in 1966, very heavy on its rivals and a chassis that was not well adapted to the power of the bike. It was difficult to stop it before the curves and was not agile, so it glowed in power circuits (with several track records) and suffered in the twisted.

The result was that Honda won the world championship of 500cc in its debut year with five victories in nine races, but on the way Jim Redman retired after a fall in the 1966 Belgian Grand Prix in which he broke an arm. Hailwood could not do to the champion motorbike neither in 1966 nor 1967 in spite of sweeping in the world cups of 250 and 350 cc due to this problem of agility of the motorbike. The champion of those years was an emerging Giacomo Agostini on a MV Agusta who would walk in the following years.

Honda retired from the World Championship in late 1967, so its concept of a 500 cc motorcycle had to be postponed for more than a decade, although of course the Honda RC181 was a mount that laid a clear basis that Honda could do well only in the small displacements as it was demonstrated later and as has come down to its day.