How to change the clutch plates of your motorcycle 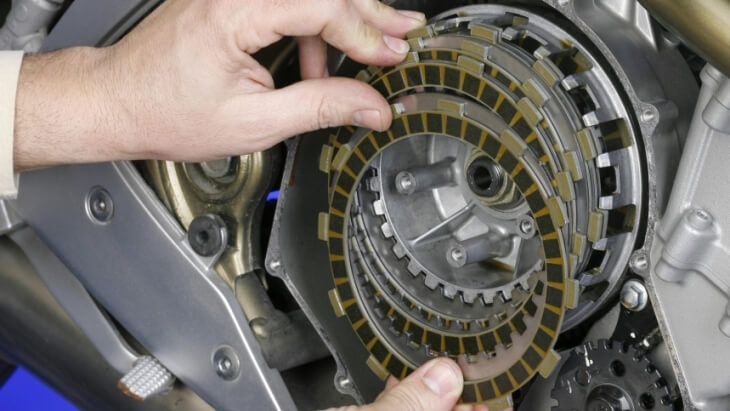 How to change the clutch plates of your motorcycle

The multiple clutch plates in oil, like all of them, work by sliding some pieces against others. This sooner or later causes its wear, but it is something very easy to solve.

Let’s remind you of the theory of the operation of a clutch: Its function is to isolate the movement of the engine from that of the rear wheel. The operation is simple, since it consists of a series of plates that are very tight against each other, so that the movement is transmitted from one to another. To stop it from happening, all you have to do is separate these plates. You can achieve this at the time you want, simply by pressing the clutch lever. When you do that, you push the springs that are tightening them, and separate plates, or at least that it ceases to be so tight against one another.

Ah, how do you know you have to change plates? When you release the clutch and the bike is slow to react as if you released it slowly or if you go in the longest gear where the engine is most demanded and, when accelerating, it suddenly climbs and does not advance further away. Then it was time to replace them.

First you have to remove the cord from the cam clutch, on top of the lid, first loosening it completely on the handle. Loosen the locknut by leaving the slot where it is possible to remove the cord. Once outside you can remove it without suffering too much. Now remove all the screws from the clutch cover and remove it. Then, the screws that compress the clutch springs, always following a cross order. Removing the discs is easy if we have the exterior. Otherwise you have to help with a wire. It can be all the same, or carry one or two paper plates pressed to avoid vibrations in the exits, at the expense of holding something less.

We check the plates. If the pad are black in color and smell of singed, these have to be changed. If the metal ones are colored too. Even if it looks good, it can be worn or warped by metal ones, and have to be checked. We leave the new brake plates in motor oil at least 4 hours. Then put them in the same order that we take them out, put the pressure cap, the springs and their screws. It is convenient to tighten them with a dynamometer, they are only 1.2 kgm, and it is easy to damage the threads. We clean the contact surfaces of the lid; put the new gasket and the pusher of the pressure plate. We put the camshaft in its position. Then tighten the head screws two or three times, fully tighten and attach the cord.