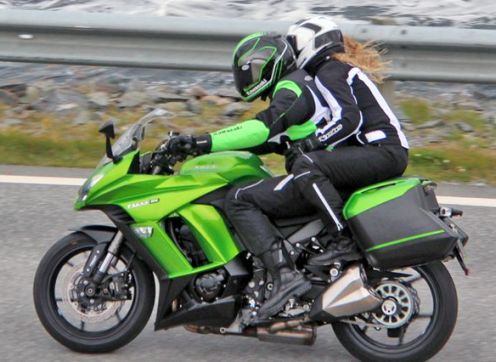 After three years on the market, the sport-tourism Kawasaki liter gets its first restyling. Aggressiveness is not lost, but the design changes slightly. The photos were taken in Norway, shooting the promotional video which will officially present the brand new model. Surely we can see in the lounge of the bike EICMA in Milan from 5 to 10 November. The Kawasaki Z1000SX was on the basis of its sister naked for reconverted based touring many parts led to improved road holding performance. In the pictures you can see the optional pack redesign, with a sharper rear, like the front optics and leaks more compact.

On the other hand, the adhesive on the front fender suggests that it will adopt the “electronic pack” inherited from its older sister, the ZZR1400 presented last year, composed of double mode of driving, ABS and KTRC traction control (3 levels of operation) generation.

A mechanical level nothing is known, it would be logical to update/revise some internal components keeping the 138hp at 9,600rpm always.