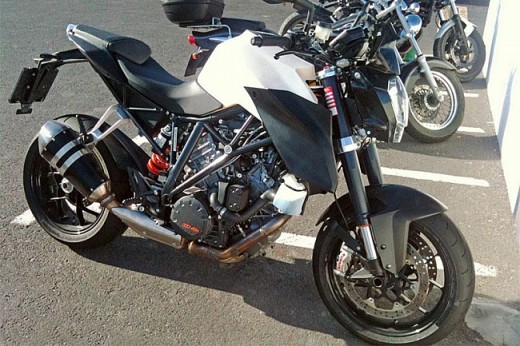 The new spy photo of the 1290 Super Duke shows a motorcycle without remarkable changes over the prototype unveiled at the EICMA in Milan. It is expected that, therefore, neither stop halfway to the huge expectations. The largest family of KTM Duke is generating rivers of ink (and pixels) before even arriving at dealerships. Although uppercase surprise came at last year’s EICMA show in Milan, when the Austrian company unveiled the prototype 1290 Super Duke R, motorcycle racing filled with accessories to enhance its sporty look. The question now is how close to the production version are both the first prototype bike as shown in the picture.

In the meantime, much of the aesthetics of the bike remains true to that seen at the EICMA, although with a front accommodated to the rest of the Duke family. The liquid-cooled V-Twin, whose power will be in the range between 180 and 200 hp, and the tubular chassis remain faithful to the prototype as well as the latest generation Brembo brakes and Akrapovic exhaust, which presumably will offer as optional accessory.

In short, it seems that the orange mark is quite prepared to not disappoint the enormous expectations generated after the presentation of Milan, but as always we will have to wait a few more months to be completely sure.