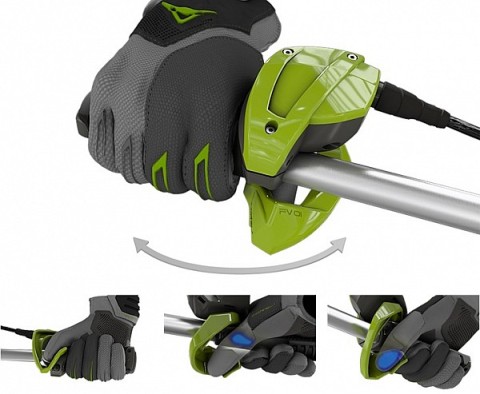 Did you think on the subject of controls and everything motorcycle was invented? Some people disagree. Inoveli is a R & D company who have developed a new accelerator, according to them, provides many advantages over traditional. No, it is not the invention of a “Nutty Professor” who has ridden on a company. Inoveli is a research and development company with more than 20 years inventing and patenting “inventions” related to the automotive world, although so far they have focused more on car rally (WRC).

Now come into the motorcycle world. Or more accurately, to the bike, quad, snow and water bikes, which they say its “Accelerator System FV01” serves and improves the control of any of these vehicles.

Not a throttle grip: the gas is handled with the thumb, not the whole hand. Nor it is a trigger to use; well mounted system, not going “pushing” with your finger on a trigger, if not you have a much more natural movement. So the effort is less, subject to your fist is stronger with less effort and is easier to control the brake lever.

The system has a series of gears inside the housing and makes the movement of thumb in the “kick” to accelerate. So, with a straight right hand and fist have caught a plane to push finger with a very natural movement speed you get. There are several crowns in the mechanism to select the path you want: 22mm, 36mm and 44mm.

This still developing, you can buy the system on their website (http://www.inoveli.com/store) but still no offer spare parts, springs and cables ready for each model. But with a bit of “banter” and cables prepared by you or your garage you can mount it already. Yes, provided you have the worth € 229.90. It is not cheap, but if what they promise is true, can be a few euros very well invested. The question is whether it really is approved and if we would spend the problems with ITV…