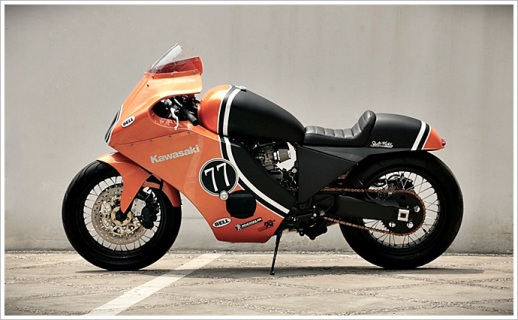 If you thought a veteran Ninja could not do anything, think again. Indonesian preparers “Studio Motor” propose us something different… that has nothing to do with the original bike. Surely a large number of bikers that today around 40 remind us of the Kawasaki GPZ600R with a special affection, as it was one of the most desirable sports at the time, but time passes and what was previously a revolutionized design has been left behind.

But fortunately from the workshop of Studio Motor have wanted to pay tribute to this veteran sports and have taken as a basis for this spectacular preparation.

The fairing is made of galvanized sheet as Donny Ariyanto, owner of Studio Motor does not like the massive use of fiberglass. And the painting was chosen for the orange Lamborghini Gallardo combined with black, varnishing the whole.

The engine has been updated and the original rocker has been replaced by a Kawasaki ZX1000. Braking is improved with new discs and two-piston Nissin calipers activated with a Nissin master cylinder also. Alloy wheels have given way to some radios that fit a few Michelin Pilot measures 120/60-17 front and 190/55-17 rear remaining wonder.