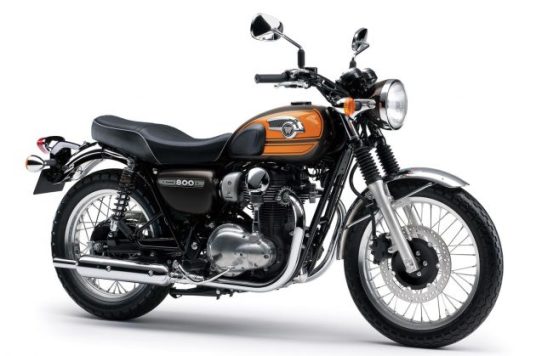 W800 with a special “Final Edition” (pictured) ends an era characterized by four-stroke engines and lighter than air cooled v-twin, begun 50 years ago. Kawasaki fans and enthusiasts from all over Europe, that will be able to win one of the limited edition models planned for 2017, so they will have the last chance to own and drive the contemporary heir of the famous W series. The history of the W800 dates back to 1966, when Kawasaki introduced the ancestress W1.

Equipped with a rugged and reliable 650cc and 50 hp engine, the W1 was the first four-stroke engine equipped with a great kawa at high performance and it proved a real production milestone – especially in the American market, where it helped set the foundation of the brand into a huge and hungry market of motorcycles.

Repeating the lines and the essence of W1, Kawasaki introduced in 1998 the W650, model enthusiastically welcomed by young and old that still tick very high prices on the used market. Thanks to the interest of an audience increasingly attentive to the retro-style, the W 800 was presented in 2011, the evolution of 773 cm3, a clever mix of classical beauty and high technology.

“It is never easy – said Morihiro Ikoma, Director Corporate Planning for Kawasaki Motors Europe – say goodbye to an old friend, especially if so beloved as the model W800. Pay homage to the W series with this “Final Edition” is a duty on the part of Kawasaki to say goodbye properly from a production of motorcycles so enduring and successful”.

The “Final Edition” will be available in the color combinations Candy Brown and Candy Sunset Orange.