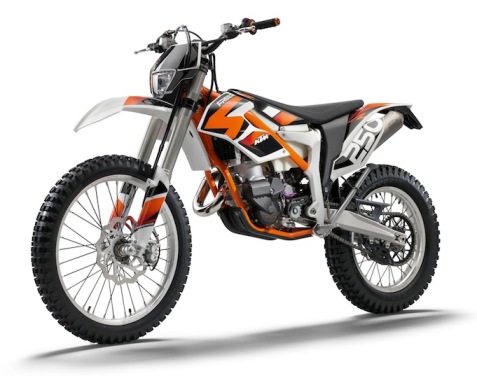 KTM reports more innovations in the Freeride range. In the new 250 2T, new details about the bike known after its presentation and developments in the familiar 350 4T. Some new techniques on the KTM Freeride 250 2T were left on the shelf after the news of the appearance of this new bike. Specifically, some technical details, such as the use of a new water pump in polymer material that contributes to greater lightness of the new engine 2T. Thus, the weight of this element is two kilos lighter than the one used in the EXC. It is also reported that the bikes now come with power limiter, as well as the necessary kit for approval and use on open roads.

With these modifications, are reported for the 25hp engine with less overall weight on the bike. Hence, and its more “joyful” than the 4T, employment is the name of that “R” end: it is intended that this Freeride Q2 in the range is positioned closer to the competition EXC, although without abandoning philosophy of leisure and “Funbike”. Thus, the 350 is like a more relaxing and “ride”.

Meanwhile, Freeride 350 4T will be used from now on a new exchange ratio, with the top 5 a little shorter and a 6th long, which lowers the engine turns regime in its use in road. A new crankshaft with a splined shaft that drives new camshaft and water pump and new bearings (already proven in the SX-F 350) improve both the feel of the engine as its reliability. In both cases (250R 2T and 350 4T) are now able to mount the automatic clutch was known ranges of enduro and cross, with lever rear brake instead of the clutch.

At the same information KTM announces that soon will “close the loop” of the range with the appearance of the desired electrical KTM: Freeride E, already known in motor show, but the final version is being expected, although no date yet for commercialization.