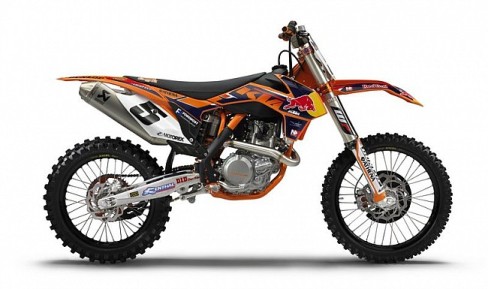 The Austrian company has launched a special edition of its customer racing- 450 SX-F. This unique replica of factory celebrates the title achieved by Ryan Dungey in the American Motocross Championship of this year. Only 710 units will be produced (155 for Europe). Red Bull KTM team have managed to go still further from the limits set by the previous model featuring many changes and innovations in this limited version of the 2013 Factory Edition.

The base of the Factory Edition remains the current generation of models equipped with single overhead cam 4-stroke engine with electronic injection and 450 cc, developed specifically for motocross, but with the engine and clutch covers redesigned to minimize weight 500 g to remove the kickstarter but keeping the “little button”. In addition, new motorcycle has a map selection switch to adjust more easily new ignition curves and a hour counter to facilitate the maintenance schedule.

On January 5 “Clockwork Orange” will load in the opening round of the AMA Supercross Series in Anaheim (California). The first units will be available at KTM Dealer Network in late January 2013.

Major modifications to the 450 SX-F standard: