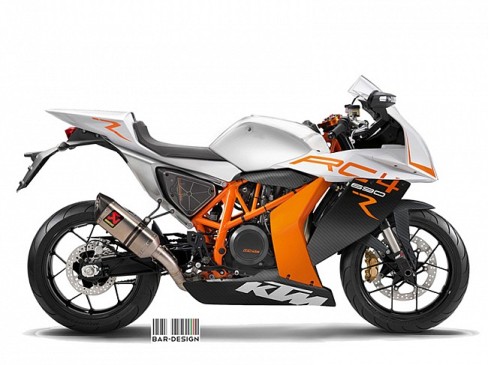 The Italian designer Luca Bar puts on paper the outlines of a hypothetical intermediate sport of the Austrian firm. The design is so managed that it seems that it is a studio photo. Clearly, an intermediate sport fit like a glove in the current catalog of Mattighofen company. Perhaps that is the reason why the graph concept presented by the Italian designer Luca Bar seems so accommodated to the DNA of the Austrian brand that would happen for real. Ready to Race.

The KTM RC4 Concept builds on the Duke 690, with its 150 kg dry weight and the 68 CV emanating from the inevitable LC4 single cylinder. On it, Bar-Design has imagined such a full fairing and even a second variant R, which has added an Akrapovic exhaust.

Few would doubt the possibilities in the market of a KTM RC4. This would be a clear third track off the Japanese intermediate sports, competitive in price but lack of personality for some, and Italian, for everyone faces.

The KTM RC4 also be a link to be taken into account in the future Orange brand catalog, once Stefan Pierer at CycleNews confirmed that in 2014 will reach the market the RC125, RC200 and RC390 derived from their respective Duke. With KTM would strengthen its already dominant role in Europe once again surpassed BMW at the level of units sold, the acquisition of Husqvarna, which for now remains shrouded in uncertainty, and the smooth running of the association with Bajaj.