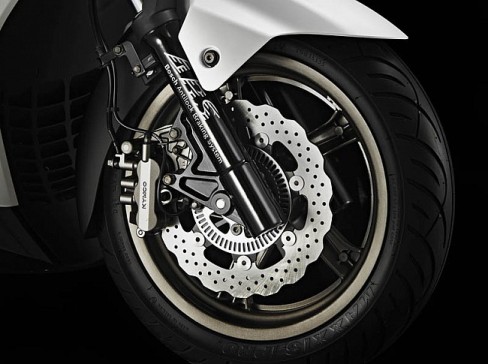 The sportiest model of the Asian firm, introduced this year, will be available with Bosch ABS system in early summer 2014. More stability and shorter braking distances are fundamental for a scooter for urban use. The modulator is two channels used to treat separately each of the brake of the scooter is located inside the front shield and is 9.1 MB, the latest from Bosch in its ninth generation. This 9.1 version is characterized by high compactness both in size and weight, essential points to equip medium displacement scooters like the K- XCT, but also for its quick reactions to significantly reduce braking distance even exceeding the results of a professional user.

When braking thoroughly with a bike, run the risk that the rear wheel is lifted due to a dynamic change of load. To avoid this, the ABS Generation 9 calculates the values of slip of both wheels. If electronics provides the possibility of causing a wheel lift, the braking pressure on the front wheel is reduced.

As usual in all ABS systems for Bosch motorcycles built in the KYMCO K-XCT is very compact. The pump housing is very small, and since simply have the technology of regulation for two wheels. The printed circuit board control module is mounted directly on the hydraulic system so that the resistance to vibration is increased. Because the brake lines are shorter and, consequently, smaller pistons, you can use a more compact return pump has been specifically designed for this system. In addition, the brake handle vibrates less and the system adapts the pressure more quickly to the friction value of corresponding type of pavement.

The safety tests conducted by independent organizations such as the German Automobile Club (ADAC) show that thanks to the ABS the required braking distance is reduced on average by 25% when cruising at 100 km/h. In addition, the advantage provided by the ABS is greater stability under braking, avoiding possible falls of motorists, especially on wet surfaces.

Externally, the K-XCT ABS only will differ from current K-XCT by the ABS logo in the fork legs, the phonic wheel with its corresponding speed sensor on the rear axle and the ABS indicator in the instrument panel. In case of system malfunction, the brakes still work conventionally.

As demonstrated KYMCO with the Super Dink 125i/300i with ABS, this K- XCT ABS will be offered at a very attractive price.