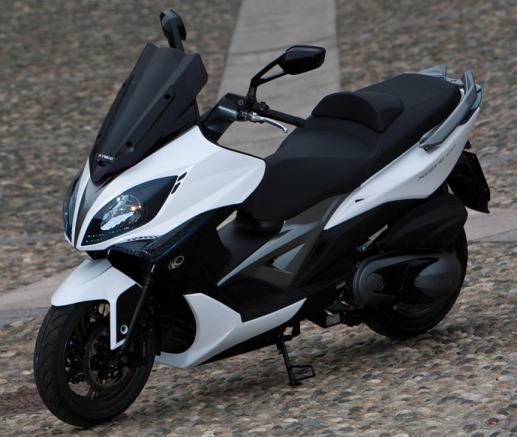 The new Kymco scooter already have launched in Italy, in fact the comrades of the Italian press have already been able to prove it. Inherits traits of his counterpart from 500 cc, as the frontal, but adds new things. It was presented for the first time in the 2011 Milan Hall, but has now been when it has been launched in Italy at a price of 5,450 euros. This is the version 400 of the popular Xciting 500, and probably arrives to other europe country in a short space of time.

In terms of design exhibits a double front headlight with virtually identical to the 500 cc version. It has LED lights and over a short and tinted windshield. At the rear is designed a completely new and minimalist, behind also with LED lights. Under the seat the hollow only accepts an integral helmet.

It is equipped with a single cylinder 400 cc engine of new invoice. It is a new engine generation called G5 SC (SC means supercharged). It also has a power of 36 CV to 7,500 rpm and a torque of 37 Nm to 6,000 rpm. The four valves the moves a single camshaft.

For chassis development has been taken as the basis of Xciting 500 but has undergone slight structural changes, maintains in change the tunnel reinforcement center. The rims are 15 inch front and of 14 behind, mounted two brake discs at the front wheel with radial-mount calipers. The version with ABS will launch later of the year.