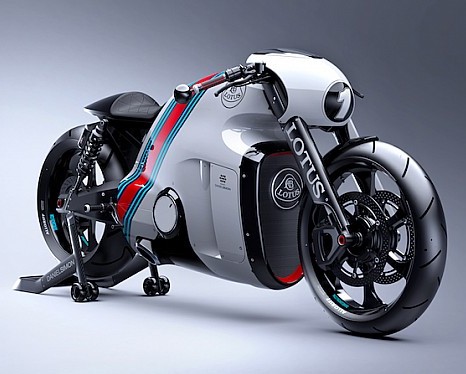 It will be a limited and numbered series of 100 bikes and, with this announcement, the brand has unveiled some more details of this very special sports twin with entering the world of two wheels. Its 200 hp to 182 kg promise. We had been talking about it since they started rumors that Lotus wanted to enter the market of high-end bikes. Just over a month ago finally published the first pictures of the complete bike, but still had no information about possible entry into production or too much technical detail.

Now we know that will be produced, so far, 100 motorbikes, limited edition. Employ an engine derived from the 1200 V2 of KTM powered through the not inconsiderable figure of 200 HP at the wheel. That is why, to declared weight of 181 kg. It is clear that the services will be identical from what the name Lotus demands.

The bike has been designed by Daniel Simon, the same designer who drew the “light cycle” from the movie “Tron Legacy”. And certain air there is among them, of course. They are manufactured in Germany, at the hands of Kodewa and Holzer, although Lotus will put its name on the bike and therefore are responsible for the final quality.

Chassis in which titanium, carbon fiber and steel mixed aerospace, some forms of bodywork motorcycle halfway between the future and old racing car and details so striking as the exaggerated release of fork, more appropriate to a custom that’s a sport or its two rear shocks, Lotus C-01 is a strange sport, difficult to pigeonhole into the usual categories. But since then, does not leave indifferent.